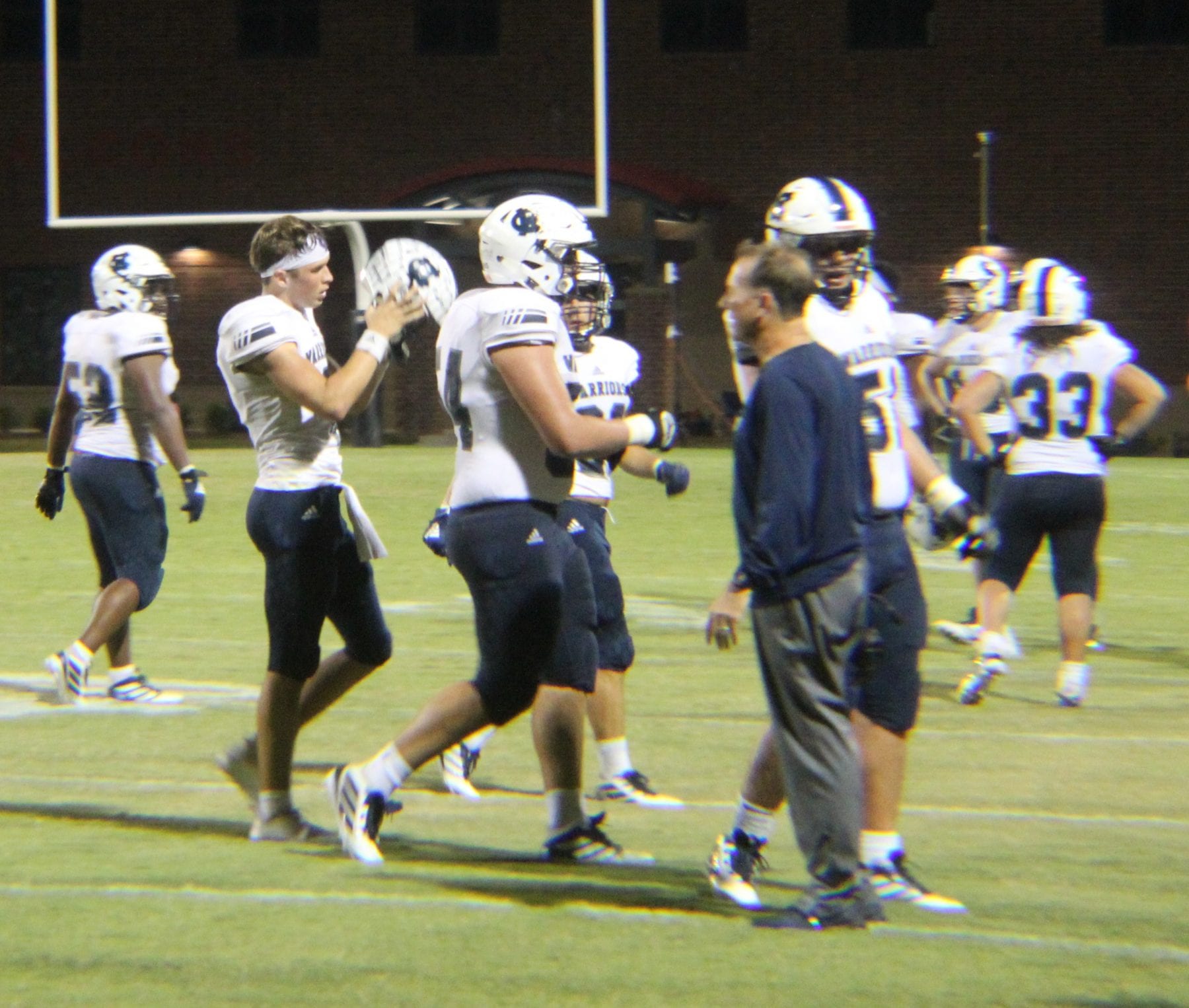 For the second consecutive week, the White County Warriors suffer a road defeat to a regional opponent. This time out, the Flowery Branch Falcons defeated them 45-20.

The game was under the control of Flowery Branch from the very start.

Their rushing attack was unstoppable throughout the entirety of the game, starting out with their team rushing down the field and scoring on their first drive, with RB Chase Dial-Watson scoring his first of 2 rushing touchdowns. On their next offensive drive, it would be RB Jaizen Ellingham scoring his first of 3 TDs, which gave the Falcons a 14-0 lead to end the first quarter. 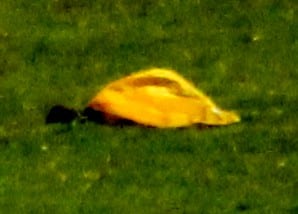 An unwelcome sight for the White County Warriors

Meanwhile, the Warriors struggled. Their defense was almost nonexistent in the first half, especially against the run. On offense, the Warriors couldn’t buy a first down in the first quarter. They finally got to move the chains during the 2nd quarter after faking a punt and passing for a first down. However, it could be argued that the biggest adversary for the Warriors tonight was not wearing pads and dressed in black. Instead, their biggest adversary was a yellow piece of dirty laundry that constantly found its way onto the field. Yes, the penalty flag was constantly setting the Warriors back and killing their momentum all throughout the night. In the first half, the Warriors were called for 4 false start calls, along with being called for holding multiple times.

Eventually, the Warriors gained some steam. 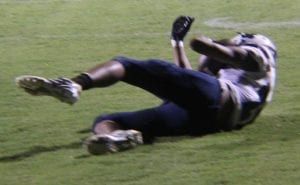 Will Sampson catching the TD pass.

After the Falcons scored another TD and converted a 32 yard field goal, the Warriors finally had a good drive going. J. Ben Haynes led his team downfield with key passes to Will Sampson and Cooper Turner. He would eventually find Will Sampson wide open in the endzone, and the Warriors would go into the half losing 6-24.

The Warriors went into the 2nd half without a key defensive player. Two time player of the week Jesse Moose would not return to the game in the 2nd half as he left with an undisclosed injury. But they started the 2nd half on offense, and Haynes was once again driving the ball downfield, including a 42 yard pass to Jesse Thomas. Eventually, the ball was at the 5 yard line, and on the next play, Haynes would throw an interception, adding on to his unimpressive tally of INTs throughout the season. 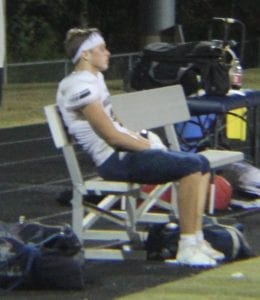 Things would go from bad to worse for J. Ben. After White County forced a 3 and out on defense, he would fumble the ball on the next offensive drive, bringing the morale of the Warriors to an all time low.

Meanwhile, the Falcons continued to play well on offense. Jaizen Ellingham would score his 2nd TD after the fumble, giving the Falcons a 31-6 lead to end the 3rd quarter.

The Warriors would not lose without a fight.

The Falcons would bring on their 2nd unit on defense, which in return, gave the Warriors a chance to fire on offense. Haynes began to play like the man we had seen earlier in the season. Haynes would score on an 18 yard rushing TD after leading his offense on an impressive and uplifting the drive. Flowery Branch and Ellingham would once again score on the next drive to bring the lead back to 25.

The next offensive drive for the Warriors was a flashback to the Lumpkin County vs. White County matchup. Zion McMullen absolutely flew past the Falcon defenders, rushing for over 70 yards on the drive, ending the drive on a 3 yard TD. But this effort was too late in the game, as Flowery Branch would drive down the field and kill the clock, before scoring another TD with less than a minute remaining, sealing their victory with the final score of 45-20.

Up next, a much needed break for the Warriors.

For the Warriors, they are now 0-2 in region play this season. On the plus side, they have an off week next week, and now have time to get healthy and recuperate. When they return in two weeks, it will be their homecoming game against West Hall. It is a must win game for the Warriors if they want any chance of making the playoffs. For more updates on the White County Warriors, follow Team FYN Sports on Instagram, Twitter, and Facebook.