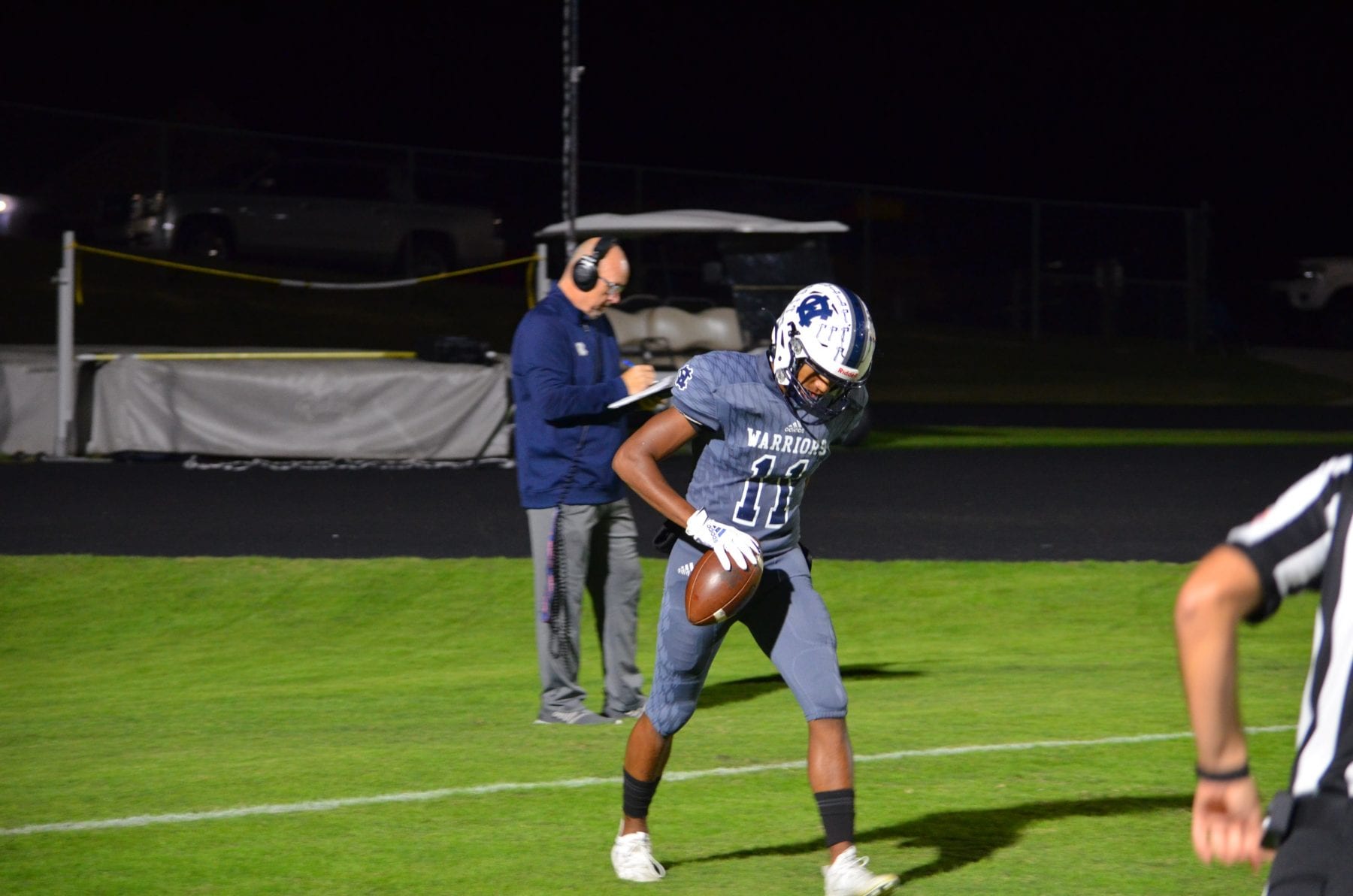 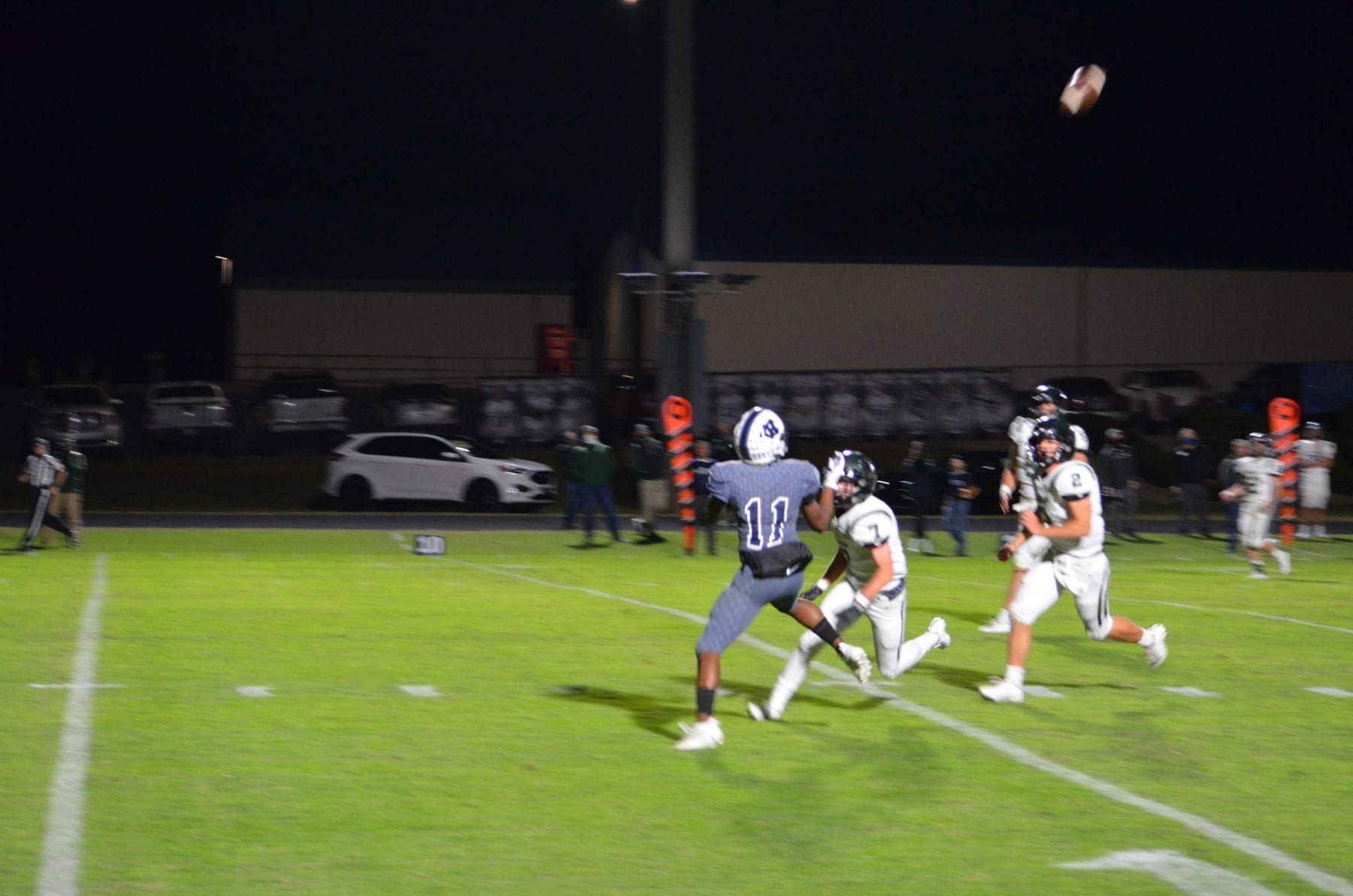 Sophomore Darius Cannon catching his first of three touchdowns on the night for the Warriors.

The Trojans received the ball to open the game but couldn’t get things started on the scoreboard. It was White Co. who struck first on a 29-yard field goal by senior Andrew Pierce to give the Warriors the lead halfway through the first quarter. White Co. was able to get another stop on the next possession, and then score on a 41-yard touchdown to Cannon on 3rd and 25. However, the Trojans responded with a big play of their own as they scored on a 64-yard screen pass.

White Co. held onto a 10-7 lead until North Hall scored on a 10-yard rushing touchdown halfway through the second quarter. The Warriors were able to respond with a solid drive. On 4th and 11, senior quarterback Riley Stancil found Cannon for a 35-yard gain that set up a 10-yard rushing touchdown by Stancil. The Trojans moved the ball down the field quickly on the ensuing possession to set up a 44-yard field goal that tied the game at 17 heading into halftime.

The Warriors received the ball to open the second half but quickly went three-and-out. North Hall used their run-heavy offense to take a huge chunk of time off of the clock on the next drive. They scored on a 1-yard rushing touchdown with less than three minutes remaining in the quarter. 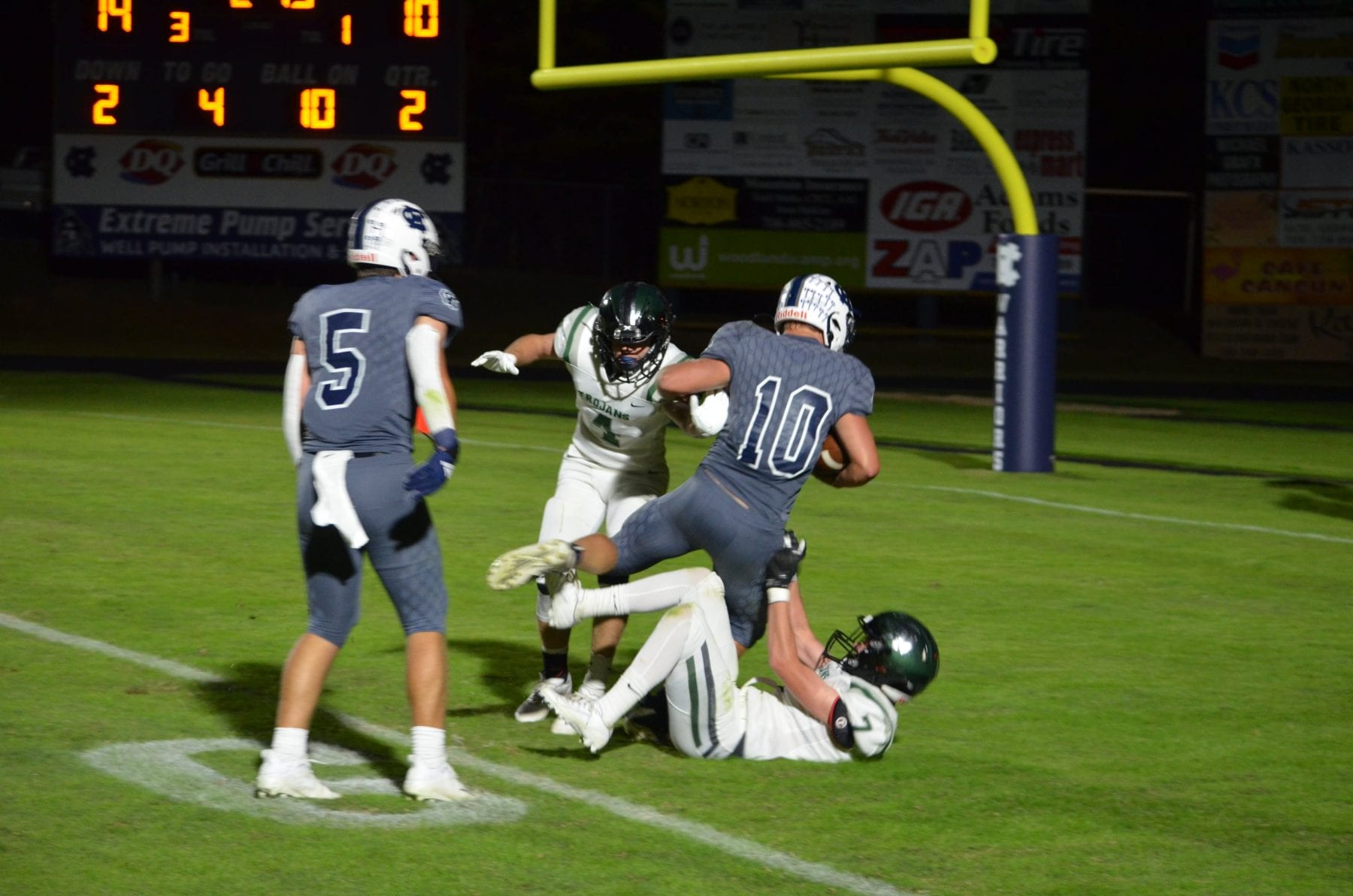 Senior Riley Stancil running right through two defenders for the touchdown for the Warriors.

On the next Warriors’ possession, they faked a punt but couldn’t convert. However, the Trojans couldn’t capitalize on the favorable field position, as they missed a 53-yard field goal. White Co. quickly got momentum back on their side with a 73-yard touchdown on a screen pass to Cannon to tie the game at 24. The Trojans once again slowly drove down the field and set up an 8-yard touchdown to give them the lead with just over four minutes in the game. Cannon once again came up big for the Warriors. On the first play from scrimmage, he caught a pass in the middle of the field, bounced to the outside, and ran 77 yards for the touchdown to tie the game less than 20 seconds later. Both teams had another possession to take the lead, but neither was able to capitalize.

In overtime, the Warriors were stopped just short of the line on 4th down. The Trojans got the ball down to the goal line on their possession, but White Co. kept making stops. North Hall eventually chipped in the 18-yard field goal to win the game 34-31.

The Warriors have another home game next week as they host West Hall at 7:30 p.m.