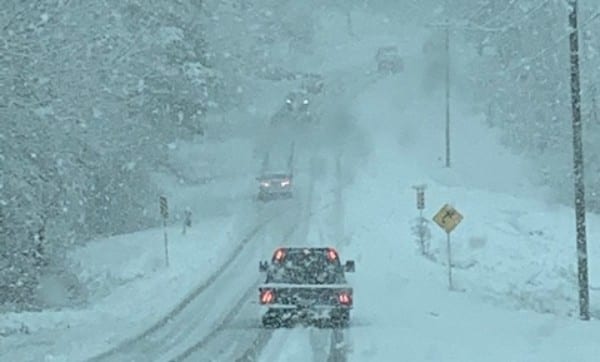 WCPS further advised for the public to stay home as crews work to treat the roadways and released in that statement “The road conditions are dangerous, we have multiple cars in ditches and blocking roadways”.

Much of North Georgia has been impacted by a winter weather event that has passed through our area, and White County has faced many of the roadway problems seen in surrounding regions.

Robert Graham, Director of the Fannin County Emergency Management Agency, explained what took place in North Georgia leading to these threatening conditions: “The pavement was wet when the snow started falling, so the wet areas on our roadways have turned to ice.”

The soft blanket of snow left many motorists feeling confident that their four-wheel-drives could handle the conditions, but the layer of ice underneath the snow is what has left many stranded on the side of roadways.

While there is a small window where citizens will see the snow begin to melt off, it is expected to refreeze tonight causing areas of black ice. It is advised to not travel tonight unless absolutely necessary.

White County Public Safety continues to urge the public to “stay home and off the roads today”.

FYN will continue to bring you weather updates throughout the day.