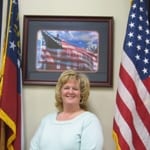 “Considering we lost two voting days due to the Fourth of July and the fact we had no Saturday voting this time, I’m excited. I don’t ever remember a time when a runoff election drew more voters than the primary election,” she said.

“Here in White County, the governor’s race and the local school board race have drawn a lot of attention,” Manning added.

The governor’s race has been a no-holds-barred battle between Lt. Gov. Casey Cagle and Secretary of State Brian Kemp. Both candidates have attracted last-minute endorsements with Cagle getting the endorsement of Gov. Nathan Deal and Kemp earning Hunter Hill’s endorsement.

The only local race on the ballot is for the White County School Board between incumbent Charlie Bryson and John Solmon.