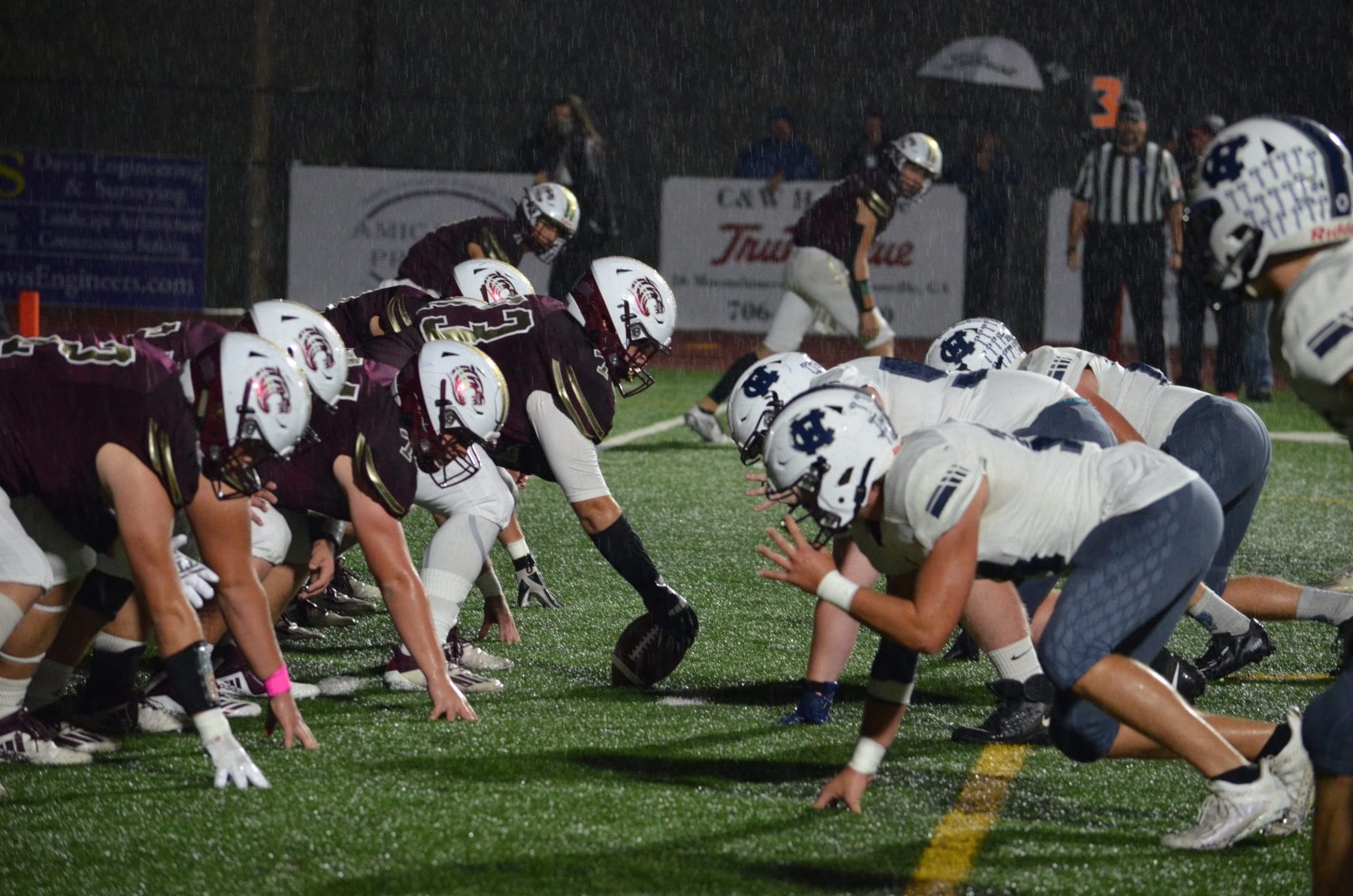 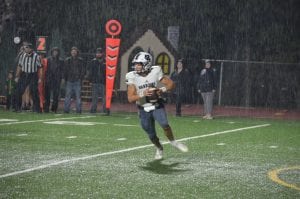 Senior J Ben Haynes scrambling out of the pocket.

Backup quarterback Riley Stancil came into in the game in the middle of the third quarter and ran for two touchdowns for the Warriors. Sophomore Darius Cannon also made a number of big plays for White Co., including a 64-yard touchdown in the second quarter.

Both teams got off to slow starts to the game. Dawson Co. received the first possession, but the teams traded a pair of 3 and outs before a bad punt by White Co. gave the Tigers excellent starting field position. They capitalized on it quickly as Holtzclaw found Lane for a 34-yard touchdown to give Dawson Co. the first points of the game late in the first quarter. The teams traded 3 and outs again before senior J Ben Haynes found his receiver for a huge 48-yard gain. However, the Warriors couldn’t move the ball into the endzone and faked a field goal attempt that gave the ball back to Dawson Co.

The Tigers reversed the field quickly on a 74-yard run by Isaiah Grindle. Shortly after, Holtzclaw found junior Conley Dyer for a 21-yard touchdown to extend their lead early in the second quarter. White Co. found life on an 80-yard kick return by Cannon to start the drive in the redzone. However, the Warriors again couldn’t finish the drive with a touchdown as junior Braedon Hubbard intercepted a 4th down pass to get the ball back for the Tigers. Junior Riley Turner got the ball right back for the Warriors by intercepting a pass on the next drive. Cannon used the interception to score a 64-yard touchdown to get the Warriors on the board late in the first half. Dawson Co. was able to strike back quickly on a 63-yard touchdown to Sonnichsen less than a minute later. White Co. finally found life in their offense and continued that momentum. Cannon had another big play on a 32-yard reception that set up a 1-yard touchdown run by Haynes that made the halftime score 21-14 in favor of the Tigers.

White Co. picked up right where they left off to start the second half. Senior Cooper Turner had a 38-yard reception that set up a 33-yard touchdown run by junior Silas Mulligan. The Warrior defense built off the touchdown as senior Jesse Moose intercepted a pass to get White Co. the ball back. With Haynes going down on the ensuing drive, Stancil stepped in and delivered the Warriors their first lead of the game on a 12-yard touchdown run. Dawson Co. fought back on the next drive, as Holtzclaw got the ball to his playmakers before eventually finding Lane for his second touchdown of the game. The Tigers’ defense stepped up this time as they set their offense up with great field position after a fake punt by White Co. Holtzclaw found Sonnichsen quickly for a 42-yard touchdown to get Dawson Co. the lead back late in the 3rd quarter. 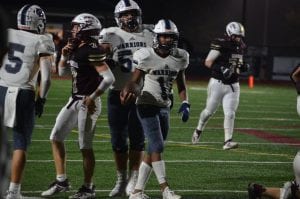 Sophomore Darius Cannon after making a big play for the Warriors.

Mulligan started off the next Warriors’ drive with a 28-yard run to swing the momentum back to the Warriors. Stancil built off of the big play with a 19-yard touchdown run to tie the game at 35 early in the fourth quarter. Grindle returned the kickoff to midfield, but the Tigers couldn’t capitalize on the field position. They attempted a fake punt of their own, but a fumble gave White Co. excellent field position for their next drive. Mulligan powered his way through the Tigers’ defense to get his team down to the goal line. However, Dawson Co. was able to recover a fumble on the 3-yard line to swing the momentum back in their favor. The Tigers struggled to move the ball to begin the drive. Holtzclaw made two huge throws on third down. The first was a 17-yard pass to Sonnichsen to get his team some breathing room. The next was a pass to sophomore Jaden Gibson that turned into a 77-yard touchdown for the Tigers to give them the 42-35 lead with less than four minutes remaining in the game. White Co. reached deep into their back of tricks on the next drive. A double reverse set up a long run by Cannon to get White Co. past midfield. The Tiger defense stepped up one last time. After a sack on third down, Gibson sealed the game with an interception to get Dawson Co. possession of the ball and the victory.