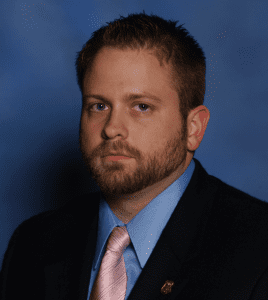 DECATUR, Ga. — The Georgia Bureau of Investigation announces the promotion of Dustin Hamby to Assistant Special Agent in Charge of the Appalachian Regional Drug Enforcement Office (ARDEO) in Cleveland, GA. ASAC Hamby will be responsible for the supervision of the Special Agents and Task Force Agents assigned to this work unit. ARDEO conducts high level drug investigations in the North Georgia area.

ASAC Hamby has been employed with the GBI for over 18 years. He began his GBI career as a Narcotics eAgent at the Oconee Drug Task Force (ODTF) and the Macon Regional Drug Office. In 2005, he was assigned as a Special Agent to the Region 1 Office in Calhoun. He transferred to the Region 8 Office in Cleveland in 2006, where he was appointed as a Child Abuse Specialist, and served there until his promotion to ASAC. ASAC.

He has also served as a Certified Law Enforcement Instructor for several years and has been one of the GBI agents responsible for teaching death investigations and interviews and interrogations to new GBI agents during that time.

He began his law enforcement career in 2000 with the ODTF in Cochran, GA as a Task Force Agent. ASAC Hamby served at the ODTF until 2002, when he accepted a position as a Narcotics Agent with the GBI. During his time with the ODTF, he worked drug investigations in the Oconee Judicial Circuit.

He received a Bachelor of Science Degree in Criminal Justice from the University of North Georgia in August of 2000.