The White Co. Lady Warriors (15-6, 7-2 Region 7-4A) defeated the West Hall Lady Spartans (4-17, 0-8 Region 7-4A) 80-36 on Friday night. White Co. played off the energy of their fans and raced out to a 29-4 lead after one quarter of play. Naomi Crumley and Caitlyn Bailey led the way for the Lady Warriors with 15 points each. Maddie Futch also scored in double digits with 13 points, and Chesnee Freeman had 10 points. 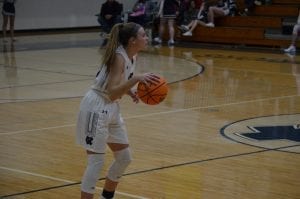 Ellie Gearing sets up a play.

The Lady Warriors dominated the game from the opening tip. The teams traded scores to open the game, but White Co. followed that with a 27-2 run to finish off the quarter. They led 29-4 at the end of the first.

White Co. kept the energy level high in the second quarter, and it led to another big quarter. The Lady Warriors led 54-15 at halftime. 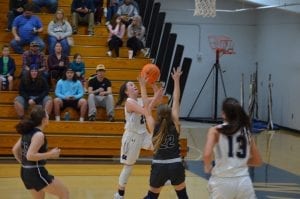 Chesnee Freeman goes up strong for the lay-up.

The Lady Warriors opened the second half on a 7-1 run to extend their lead even more. They took a 70-26 lead into the final period of play.

The 4th quarter scoring was even for both teams, as they each scored 10 points. The final score was 80-36.