In what was a tale of two halves, the White County Warriors lost a close game to the Habersham Central Raiders 42-28

Coming into tonight’s game, the Warriors had plenty of momentum as they had just dominated Lumpkin a week prior. On the other hand, Habersham had lost two straight games to open their season and were in desperate need of a win. The last three times these teams had played, they were all close games that went down to the wire. Tonight’s game was no different. 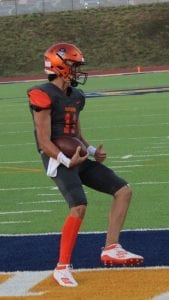 Just like last week, the Warriors were constantly being held back by penalties. Any time they had any momentum going their way, they would be flagged for a false start or blocking in the back or other avoidable penalties. However there were some bright spots in the first half. Nix Burkett had a clutch interception halfway through the 2nd quarter to stop Habersham’s momentum, and fire up the Warriors. Also, the Warrior offense slowly began to gain ground on their drives. White County may have went into the half down 21-0, but they were not going to give up. 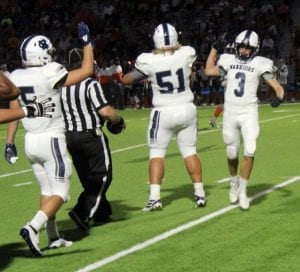 Nix Burkett celebrating after his Interception

As the 2nd half began, the Warriors began to bring the fight to the Raiders.

White County began the 2nd half scoring touchdowns early. On their first offensive drive, Haynes fired a TD pass to Toby Turner to give the Warriors their first points of the game, making the score 21-7. Ryte Woodruff would score another TD for Habersham on the next possession, but that did not phase the Warriors. As a matter of fact, it may have fired them up even more. 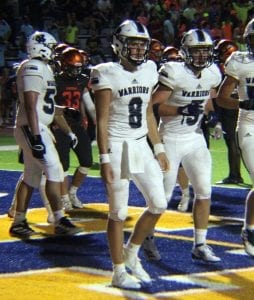 The Warriors were in complete control for close to 12 minutes of game time. A big factor in this was a personnel change made at the half. Riley Stancil took over for Zion as the lead runningback, and brought new life. He became an immediate threat in both the running and passing game. Haynes would score a rushing TD midway through the 3rd to bring the deficit to 13 (14-27). After another quick Habersham TD, the game was in the palm of the hand of J. Ben Haynes.

Haynes put in one of his best performances yet. He threw another passing TD, this one to Nix Burkett, once again bringing the deficit to 13 points at the end of the 3rd quarter. White County’s special teams would convert a successful onside kick, their second of the game, to increase their momentum. Haynes would then lead the Warriors on an increasingly up and down drive. As the fourth quarter progressed, Haynes converted three 4th downs on the same drive to keep their chances alive. His final 4th down conversion would be a TD run at the goal line to bring the deficit to six.

Unfortunately for the Warriors, their good fortune would not last until the end of the game.

Even while the Warriors were dominating, they were still being held back by penalties. Multiple times, they had their momentum halted by penalties for illegal receivers (offensive linemen being more than 5 yards down field while blocking on a pass play). As for the Raiders, their next offensive drive would prove to be a game sealer. They drove down the field, and Jackson Clouatre scored a deflating TD. Habersham then converted a 2 point conversion to increase the lead to 14. Haynes led the Warriors on the field, but soon turned the ball over on downs after missing passes on 3rd and 4th down. On the next drive, the Warriors would make an impressive goal line stand, but they ran out of time in their comeback efforts.

White County played great tonight, even in defeat. As they play against the Pickens County Dragons next week, they will have to be more careful with their penalties if they have any hopes of winning. The Warriors lost twice against Pickens last season, including a loss in the first round of the playoffs. Can the Warriors gain another win before starting region play?