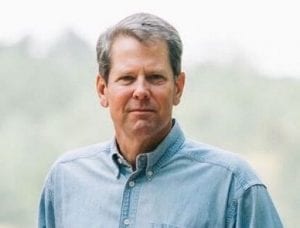 CLEVELAND, Ga. – Advanced voting for the 2018 General Election begins next week and Georgia is the home of one of the most intriguing – and expensive — gubernatorial races in the nation.

Pollsters say the race is neck and neck. On Sept. 6, the Atlanta Journal-Constitution/Channel 2 Action News poll had it 45 percent for Republican Brian Kemp, 45 percent for Democrat Stacey Abrams, 2 percent for independent Ted Metz and 7.5 percent undecided.

Folks who make a living analyzing political races say the Democrats had the momentum and that anger over President Donald Trump’s policies was driving increased voter registration on the left. But that was before the bitterly divisive hearings for Supreme Court Justice Brett Kavanaugh.

Infuriated by the “guilty until proven innocent” uncorroborated sexual assault accusations of the liberal left, Republicans have seized the momentum and can be expected to turnout in record numbers to support Kemp.

Health insurance is one key policy difference between the two leading candidates. Abrams supports Medicaid expansion. Kemp says it would bankrupt the state.

Kemp carries the endorsement of President Donald Trump into the election. Abrams is the darling of Nancy Pelosi, Chuck Schumer and Hillary Clinton, who hope to change the color of Georgia from red to blue.

Advanced voting will be held Monday through Friday from Oct 15 through November 2 between the hours of 8 a.m. until 5 p.m. Voters may also cast a ballot on Saturday Oct. 27 from 9 a.m. until 4 p.m. All advanced voting in White County will take place at the Mauney Building, 1241 Helen Highway, Cleveland. The General Election Day is Tuesday, Nov. 6 from 7 a.m. until 7 p.m. when all precincts will be open.

A large number of candidates who will appear on the ballot are running unopposed. They include State Senator Steve Gooch, State Representative John Wilkinson, State Representative Matt Gurtler and Northeast Judicial District Attorney Lee Darragh. In addition to choosing political candidates, voters will have an opportunity to vote on five proposed Constitutional amendments and two statewide referendums.