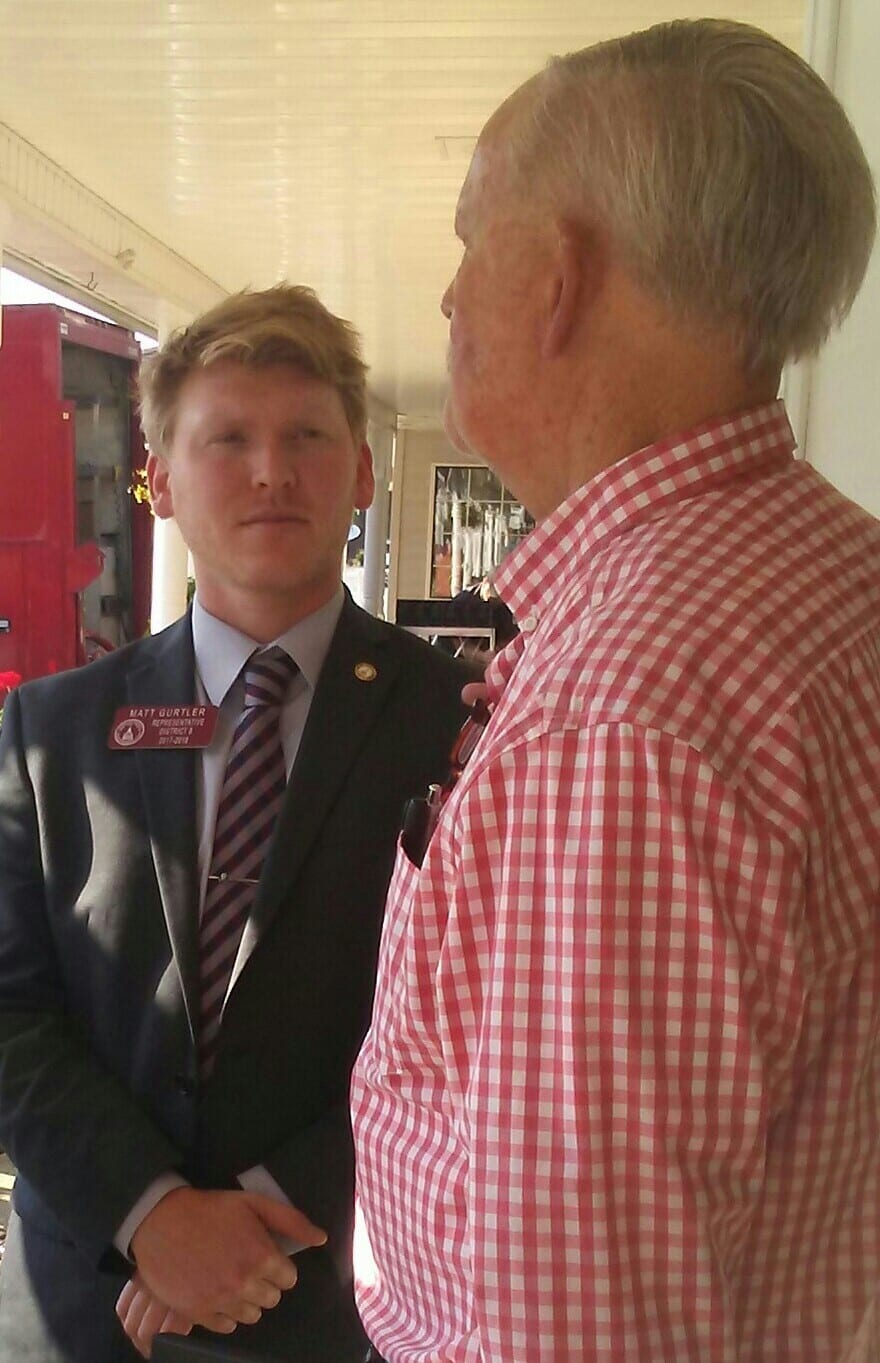 HIAWASSEE, Ga. – Early voting for the May 22 General Primary election has begun, and District 8 State House Representative Matt Gurtler addressed the Mountain Movers & Shakers at Sundance Grill on Friday, May 4, 2018.

The Republican incumbent touched on several issues, including what he says is an attempt by State House leaders to dampen his re-election efforts by contributing high-dollar funds to his challenger’s campaign.

“I became the most conservative House member in the General Assembly my freshman year, just by following Republican principles to the T, and not wavering from them as much as possible,” Gurtler said, “That definitely got a lot of respect from my colleagues, but the leadership, not so much. They have an agenda that is contrary to the will of the people, a lot of the time.”

The 29-year-old incumbent, a Rabun County native who described himself as an “anti-crony capitalist,” was elected to represent Georgia House District 8 in 2016, securing the seat with 61 percent of the vote in the Republican Primary runoff election. Gurtler recently voted against the $26 billion dollar state budget, an increase of $1.03 billion above the prior fiscal year, describing it as an “omnibus spending bill, full of subsidies, and wasteful spending.” Gurtler says the budget should be departmentalized, rather than swept into a swift “all-or-nothing” vote.

In sum, Gurtler opposed the Georgia State House at a rate of 39 percent during his first-term in office.

Gurtler noted his introduction of stalled House Bill 156 (HB-156) Georgia Constitutional Carry Act into legislation in January, 2017. Gurtler also spoke of his objection to Georgia’s Hotel-Motel tax, claiming the $5.00 per night tax deters local tourism by encouraging visitors to lodge across state lines. Gurtler promised, if re-elected, that he will continue to press for free market principles, battle intrusive laws and regulations, and advocate for local control of education.

“I read every single bill,” Gurtler assured, “There’s a lot of things the public just isn’t aware of at the Capitol. I want you to know what’s actually going on so that we can have real change come to Georgia, even at the federal level. We’ve got to lead by example. That’s the only way we are going to change things.”

Gurtler relayed that he publishes his voting record online, along with descriptions of each decision, in effort to keep the public informed.

As Gurtler’s presentation concluded, when a citizen publicly inquired as to whom is financing his opponent’s campaign. Gurtler replied, “Big businesses and big politicians in Atlanta, and you can follow this on the Secretary of State website. It’s all open to the public, and I advise you to do that. I can see the money trail from my last opponent, the exact same donors. Even going as far up to the Speaker of the House, the leadership. I threaten the establishment. That’s just the truth of it.”

Georgia State House leaders are reported as contributing a total of $13,700 to Gurtler’s challenger thus far. The incumbent tells FYN that the majority of his campaign funding is derived from “local, salt-of-the-earth supporters” whom contribute an average amount of $25 dollars per donor.

Republican Senator Michael Williams, a gubernatorial candidate whose political platform was reported by FYN in March, spoke in accord with Gurtler during Friday’s forum.

“I am not scared,” Williams continued, “What I am tired and fed up with are candidates who get up here, and tell you anything and everything you want to hear, only to get down there to do something different.”

Supporters responded to the state senator’s sentiments with an amiable applause.

Robin can be reached by dialing 706-487-9027 or contacted via email at Robin@FetchYourNews.com --- News tips will be held in strict confidence upon request.