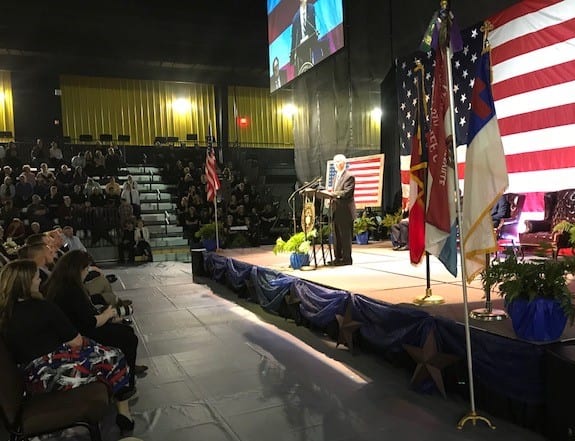 North is a decorated combat veteran who served 22 years in the United States Marine Corps. During the Vietnam War, he led a marine platoon and won a Silver Star and two Purple Hearts for his service. In 1981, President Ronald Reagan appointed him deputy-director of the National Security Council where he played a key role in a series of controversial military and security actions. The retired Lieutenant Colonel is a political commentator, television host, military historian and New York Times best-selling author.

Starnes is a conservative columnist, author, and host of the Todd Starnes Show on radio.

TMU is a private, Christian coeducational university currently ranked 57th in Regional Colleges South. The school has 215 students mobilized in various regions in the U.S. and around the world through mission trips and mission ministries.

All proceeds from the event help fund the Empower the Call campaign, which provides assistance for student mission trips, creates retention scholarships, and reduces missionary student debt, allowing TMU alumni currently on the mission field to remain and continue sharing the gospel message.

North said, “To accomplish the mission of what we’re doing on the battlefield or in mission work, there are three basic requirements: situational awareness, having the right people to do the job and a sense of commitment by everyone involved in that mission. 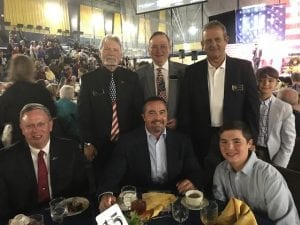 “The idea of situational awareness is think about the preparation for the cultural challenges you are going to face, the bad water, bad people, bad food and how to deal with it all. All of that is a crucial part of accomplishing the mission of this ministry just as it is in the Marine Corps, the U.S. Army, Navy Seals or Air Force Air Control unit.”

Those who attended had an opportunity to view a half-scale replica of the Tomb of the Unknown Soldier in the lobby of the Student Wellness Center presented by the Exchange Club of Rome, Georgia Americanism Committee. 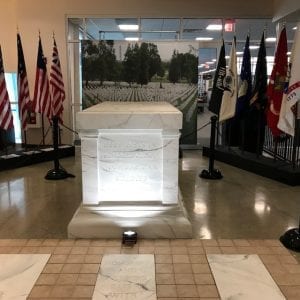 This replica of the Tomb of the Unknown Soldier was displayed by the Exchange Club of Rome, Georgia, Friday.