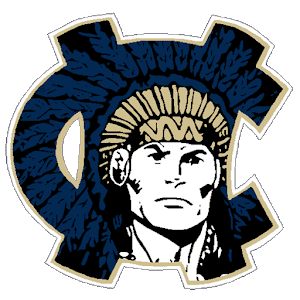 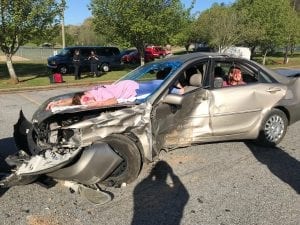 CLEVELAND, Ga. — It was just a mock vehicle accident, but hopefully the students at White County High School (WCHS) got the message, especially with prom night fast approaching.

The “accident” was staged by White County Emergency Services along with students from the high school and the nursing school at Truett McConnell University (TMU). The setting was the lower parking lot at WCHS and the entire student body was on hand to witness the event.

In introducing the accident, WCHS Principal John Osborne said, “One of the most liberating things you will ever do is to get your license. But don’t ever, ever not respect what a car can do. You are literally driving a missile and you’ve got to take that seriously.” 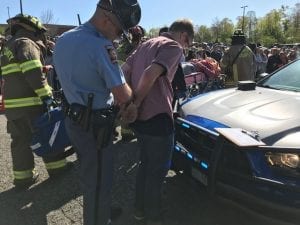 White County Emergency Services employees Ana Newberry and Josh Taylor narrated the events, explaining the actions that are taken at a fatal accident scene. Sadly, their narration struck very close to home. Newberry lost her son in a car wreck and Taylor lost his younger brother. 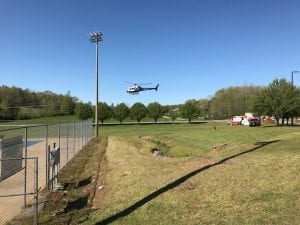 An AirLife helicopter arrives at WCHS Friday ready to transport victims to the hospital following the mock car crash.

Throughout the event, Partain’s “lifeless” body lay on the hood of the car she was driving. First responders worked to extricate the passengers in her vechicle, TMU students Bradley, Chaverria, Badu, Harris, Brown, and Drane.

Meanwhile, a state patrol officer administered field sobriety tests to Stein before placing him in handcuffs and transporting him to jail.

Moments later, an AirLife helicopter landed to transport the injured to the hospital.

He talked about being on duty at the fire station the night he heard a 911 call come in about a traffic fatality. “I thought ‘Man, I hate that for somebody. They just lost a loved one,'” Taylor said. Thirty minutes later, he learned the deceased was his younger brother. 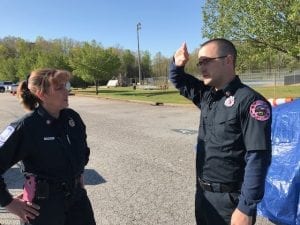 Newberry recounted to the students the day her son was killed in a motor vehicle accident. “He over-corrected while he was reaching for the phone that I was calling him on,” she said. “I had to go to the hospital because the GSP (Georgia State Patrol) would not let me go to the vehicle. There is my son coming out of the ambulance with a sheet over him,” she said as she fought back tears. “If you don’t think that affects you as a mother. I’ll never have grandchildren. He will always be 24 to me. So that phone you’ve got in your hand, put it down!”

Hopefully, the hard work by the school, first responders and students will save someone’s life.