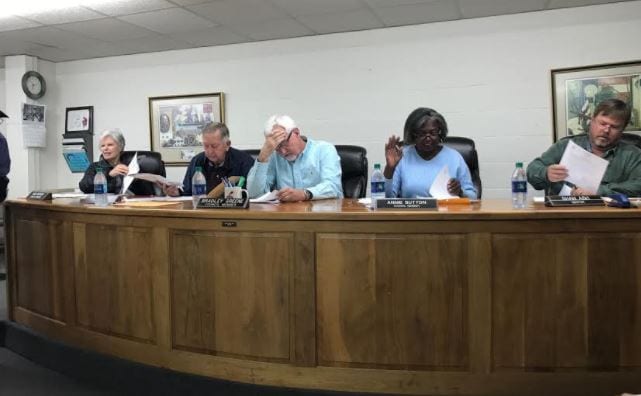 Rindt reported the tank was filled to the five-foot level Monday. The contract called for the work to be completed by Nov. 7, and Rindt said the company had requested an extension of five days due to inclement weather. Council voted unanimously to award the extension, meaning the contract was completed in accordance with the terms of the agreement.

The company now has 30 days to complete a punch list that includes grading, grassing and fencing.

Rindt also informed the board that casing in well no. 7, located on East Jarrard Street, does not meet EPD standards for the thickness of the casing and must be brought up to the agency’s standards.

Council then voted unanimously to spend $7,900 with Lanier Well Drilling to make the necessary improvements.

Beth Truelove requested the city provide services such as police, fire and sanitation for the annual Christmas in the Mountains Celebration scheduled for Dec. 2 from 5 to 8 p.m. Her request received unanimous approval.

Council discussed possible future annexations but decided not to move forward at this time.

City Administrator Tom O’Bryant updated the council on the status of one of the city’s fire trucks that is in need of repair. O’Bryant said the city received two estimates, one for $112,000 and the other for $150,000. He also presented the council with an option to purchase a 1997 fire truck from Brackets Fire Truck Repair for $96,000. The vehicle comes with a six-month, bumper-to-bumper warranty. It has an engine and transmission installed in 2009.