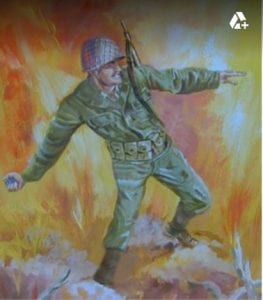 CLEVELAND, Ga. – Ron Webb of the Northeast Georgia Veterans Society will present information on a proposed military statue to honor Pvt. Rondall H. Glaze, White County’s highest decorated soldier, who was killed while serving in the U.S. Army during WWII when the White County Board of Commissioners meet Monday at 4:30 p.m.

Private Glaze was awarded the Distinguished Service Cross, the nation’s second highest award for valor, for extraordinary heroism in action on 17 February 1945, near Lixing, France.

Glaze’s rifle company was pinned down by heavy machine gun fire from German soldiers until the 18-year-old private started crawling across open ground toward the machine gun crew. Despite being wounded by gunfire, the Cleveland teenager lobbed a grenade that killed the crew and allowed his fellow soldiers to advance. That heroic effort cost Glaze his life.

Webb and the veterans organization is attempting to raise enough money to be able erect a statue of Glaze at Freedom Park, behind the White County Courthouse so he will never be forgotten.

During the combination work session and regular meeting, commissioners also will discuss a number of new contract options, including Phase 2 trail construction at Yonah Preserve, a vehicle lease for seven vehicles to be used by the sheriff’s office, installation of a mobile generator for EMA and billing services to recover fire response fees.

Additionally, several housekeeping items are on the agenda, including consideration of the renewal of annual contracts for the fiscal year 2018 budget with Avita Community Partners, the County Health Department, Family Connections, Legacy Link, Chamber of Commerce, Convention and Visitors Bureau and Department of Family and Children Services.

Commissioners also will consider board appointments to the Planning Commission and the Department of Behavioral Health & Developmental Disabilities.

Finance Director Vicki Mays and her department will be recognized for receiving the Government Finance Officers Association Certificate of Achievement for excellence in financial reporting and County Attorney Bill House will be recognized on the occasion of his retirement.

Fetch Your News is a hyper local news outlet that covers Dawson, Lumpkin, White, Fannin, Gilmer, Pickens, Union, Towns and Murray counties as well as Cherokee County in N.C. If you would like to follow up-to-date local events in any of those counties, please visit us at www.fetchyournews.com