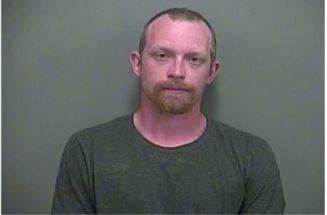 CLEVELAND, Ga. — A Cleveland man wanted by police in Helen for alleged stalking, aggravated assault, escape and willful obstruction of a police officer was arrested by White County Sheriff’s deputies on March 21.

Brandon Alvin Myers, 28, is accused of stalking his ex-girlfriend Samantha Roberts, 27 of Helen, the mother of his infant son. Roberts filed a complaint with the Helen Police Department in November that indicated Myers called her phone and texted her constantly after they broke up. She also claimed that he followed her and tried to run her car off the road as she returned from grocery shopping.

Officer Phillip Wood confronted Myers in the parking lot of a public housing project on Petes Park in Helen last November. Wood reported that Myers became agitated while being questioned, pushed the officer away and then bolted into the woods behind the complex. Officers gave chase, but could not locate him.

Myers is currently housed in the White County Detention Center. His bond has been set at $42,000.