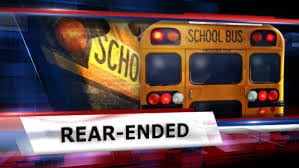 “We had two buses rear ended about five minutes apart today,” said White County Superintendent of Schools Jeff Wilson. “There were students on both buses, but no one was injured.”

The accidents took place within five minutes of each other and both buses were rear-ended. One collision took place at Ga. Hwy 115 at Pless Road, east of the City of Cleveland. The other occurred on Ga. 115 near Luther Palmer Road west of the city.