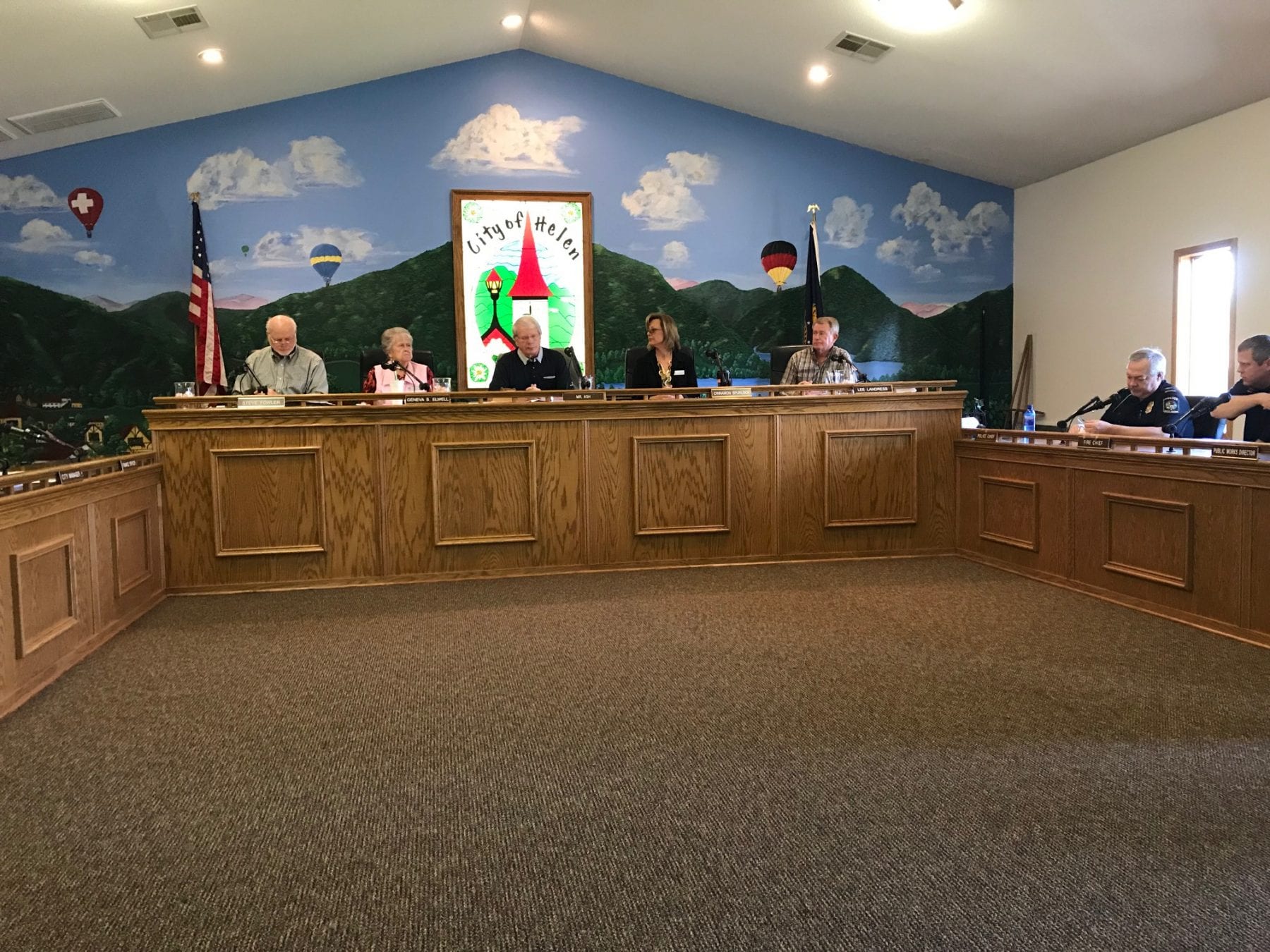 The city’s total revenue for the first eight months of fiscal year 2017-2018 was $2,655,456 compared to $2,272,592 for the same period in the prior fiscal year. At this point, the city should have reached 67 percent of its projected revenue for the year. Instead, it has already reached 86 percent.

A refund from Georgia Power for over payment of $141,782 is responsible for part of the gain.

Council unanimously awarded a contract to Square Deal Enterprises, Inc. for the Willow Pond Culvert replacement project in the amount of $26,697.50.

The bid to supply material and install concrete sidewalks and two handicapped access points as well as a concrete entry apron at Hardman Trail Connection was awarded to Wilkinson Concrete of Cleveland. The low bid was $18,029 but the cost will be lower since the company overestimated the length of the sidewalk.

⦁ A request by Terry Sims to place a metal roof on the coaster ride development;

⦁ A request to place a larger sign at Bear Creek Lodge that exceeds the city code due to its distance from Main Street;

⦁ The use of City Park on the first Saturday in November to hold the annual car show “Rods on the Hooch” as a fundraiser for the annual White Christmas for Kids; and 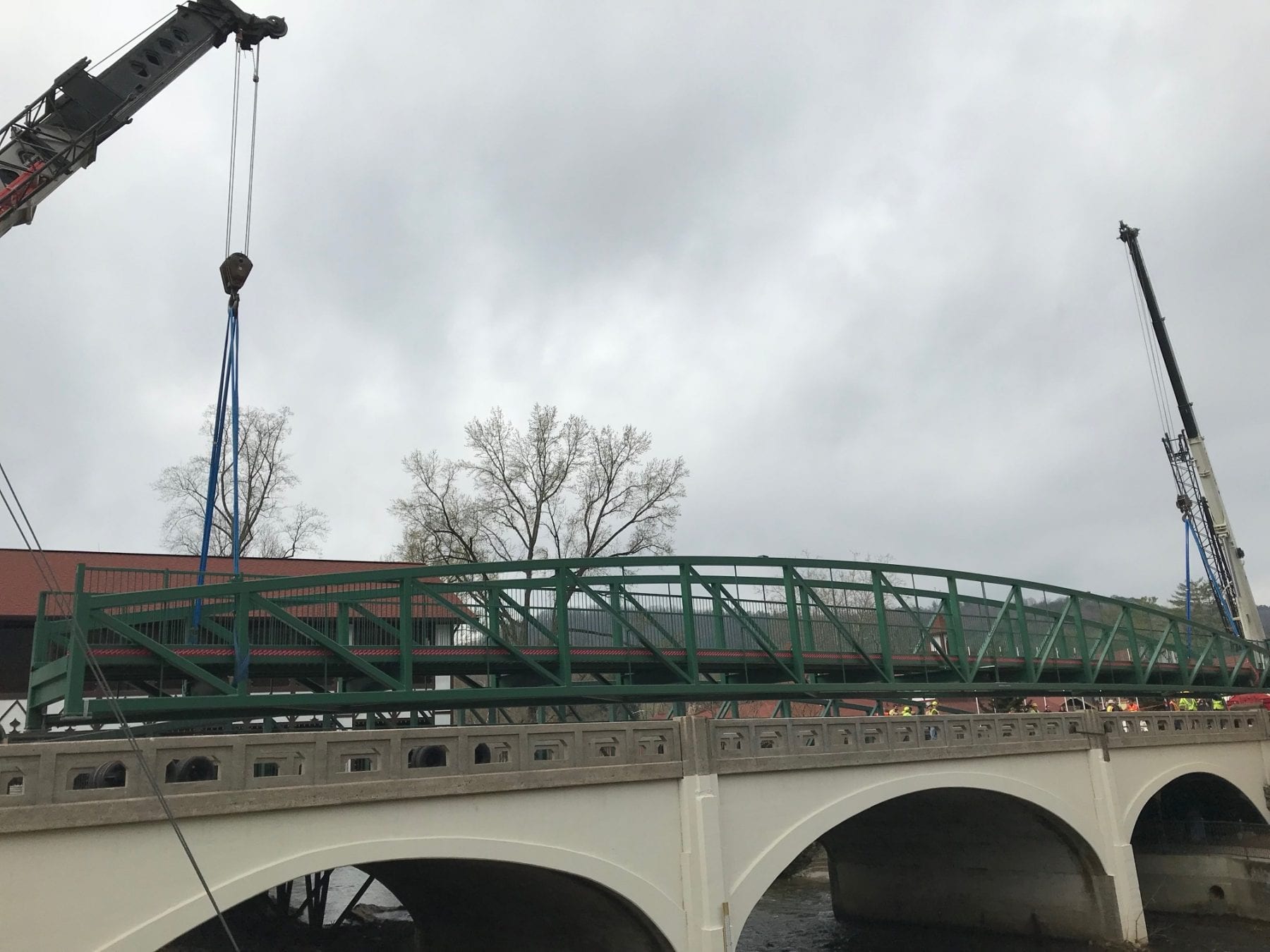 ( Feature Image: Cranes lift Helen’s new pedestrian bridge over the Chattahoochee and lower it into place, as 50 to 60 onlookers applaud their effort.)

HELEN, Ga. — At 11:20 a.m. Thursday, two massive cranes lifted a 61,300-pound pedestrian bridge high above the Chattahoochee River and swung it precisely into place between International Cafe and The Castle Inn, completing a project seven years in the making.

The work had to be precise because crane operators had to lower the massive bridge onto two concrete platforms on each side of the river. The structure with pre-drilled bolt holes in the bridge had to line up precisely with the bolt holes in the platforms.

An army of workers from Square Deal Enterprises did an outstanding job of prep work. Once the bridge was secure, the workers drew a well-deserved round of applause from 50 or 60 townspeople and tourists who came out to watch.

Opening the bridge to foot traffic is still two to three weeks away. The next step is to pour about 100,000 pounds of concrete for the walking surface and allow it to set. However, Mayor Jeff Ash said he expects to have it open before tourist season begins.

The bridge is 157 feet in length, with a total width of nine feet and walking width of 7.5 feet. It is a twin span to the one directly across Main Street in front of Paul’s Steakhouse. 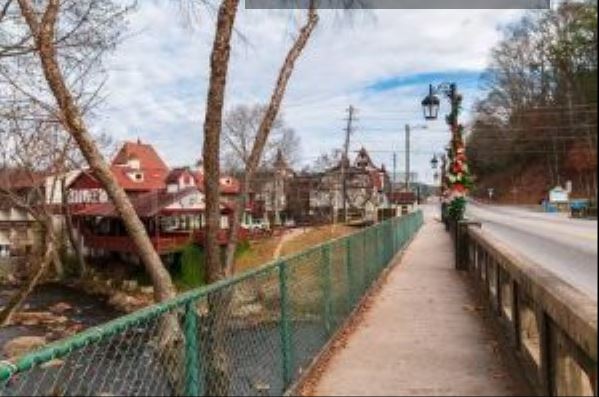 HELEN, Ga. – A contract for the construction of the long-awaited — and now more expensive — pedestrian bridge over the Chattahoochee River along Main Street was awarded to Square Deal Enterprises again at Tuesday’s Helen City Council meeting.

Council originally approved the contract in June for $586,022 but was forced to rebid the project because it will be funded, in part, by federal Transportation Enhancement dollars through the Georgia Department of Transportation. The original bid did not include a provision requiring a portion of the work to be completed by minority or woman-owned business.

The bridge will connect the sidewalks that front The Castle Inn and Café International and is identical to the bridge that exists in front of Paul’s Steakhouse on the opposite side of Main Street.

Four companies submitted bids in June but only one met the federal requirement and it was $270,000 higher than Square Deal’s bid. The council then had to choose between accepting the higher bid or rebidding the project. They chose the latter.

The bid now goes to GDOT for final approval.

Council also approved the addition on another entrance/exit for the city fire department and the second reading of an ordinance to amend Chapter 6 of the city’s municipal code as it relates to alcoholic beverages. 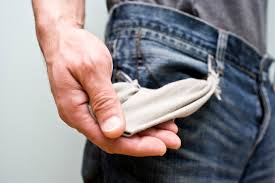 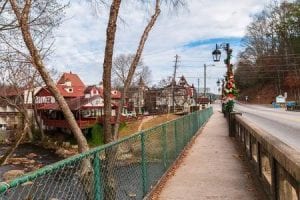 HELEN, Ga. – As they often do, obtrusive and unnecessary federal regulations have delayed another local project and, in all likelihood, made it more expensive for taxpayers.

Last week, the Helen City Commission approved a contract to build a pedestrian bridge across the Chattahoochee River to Sautee-based Square Deal Enterprises, a company the city has frequently done business with and found to be more than satisfactory. Square Deal built an identical bridge for the city directly across Hwy. 75 and presented a bid that was the lowest of the four received.

But, because the agreement was to have been funded with federal Transportation Enhancement dollars through the Georgia Department of Transportation, it required that a percentage of the work be performed by a minority or woman-owned business. Square Deal did not meet that requirement. Only one bid did and that would cost the taxpayers an additional $270,000.

That left the city with only two options. Either pay the extra $270,000 or rebid the project. On Friday, the commission opted to re-open the bidding process.