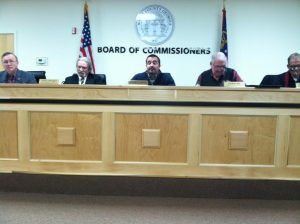 CLEVELAND, Ga. — The White County Board of Commissioners tabled requests for funding from Hardman Farm for the 2017 Fall Festival and the Chamber of Commerce for Spirit of Appalachia Food, Wine and Art Festival at Monday’s joint called meeting and work session.

The county recently voted not to increase the millage rate, but instead draw down the reserve fund to help balance the budget so they were reluctant to approve additional funding until the tax digest has been reported later this month.

The board did agree to purchase a new mower for the Parks and Recreation Department for $12,294 which will be paid for out of the Special Purpose Local Option Sales Tax receipts and a new Ford F-150 pickup truck for Animal Control for about $22,000 which was already included in the budget.

“I have some real good news,” Hamby said. “Folks are spending money up here. There is no question about that.”

In June, the county reported more than $300,000 in SPLOST collections. The current SPLOST was projected to raise approximately $19 million and less than halfway through, the county has already collected $9, 727,213.

Sheriff Neal Walden took time to congratulate the Appalachian Regional Drug Enforcement Office (ARDEO) which conducted a raid last week that dismantled a major drug trafficking organization operating primarily out of Stephens and Habersham counties but supplying drugs to a much wider section of north Georgia including White County.

“The drug task force took a bite out of the drug trade in northeast Georgia over the weekend,” Walden said. “That was about a 6-8 months investigation. They did a good job taking a lot of drugs, guns and money off the street. It didn’t show any stats in White County but trust me, for these dealers here it’s just a hop skip and jump over to Habersham and Stephens counties. That’s where they’re going to get most of it.”